A dance created by Anonymous Morris. It is our method of settling side disputes. It covers a surprisingly large amount of room for a dance often danced with only two, and works particuarly well at the end of a set (especially if followed by a broom dance, with the broom dancer sweeping the corpses off the dance area before starting). 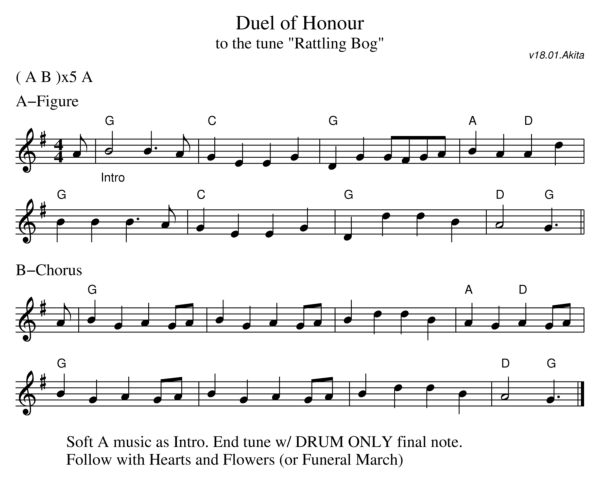 Number of dancers: This dance can be done with any even number, but it probably looks best when done a single pair. If you do have multiple sets up, make sure there is space between the to swing the sticks without hitting anyone you shouldn't be. Each pair is dancing their own private self-contained duel with no interaction between one pair and any of the others.

Notes on the music: This dance needs a good drummer. Different figures require different drumming and it’s mostly a matter of experience working it out. As a rough guide, while most of the dance will be drummed on the first and third beat as normal, ‘Drill Square’ will benefit from drumming on every beat, as this matches better to what the dancers are doing.

The band will also find that varying their style of play is useful. On the more flowing figures like 'Parade' and 'Go Right', play smoothly. On more militaristic figures like 'Guard' and 'Drill Square', go for a more staccato style.

The band should miss out the last note on the final figure, except for the drummer who should strike as hard as they can to give us a nice distinctive gunshot. (If you haven’t got a drummer, just have as many people as possible shout ‘Bang’.)

The dance is mostly standard stepping, but there are several figures that involve marching/stomping.