The East Acton Stick Dance was originally a comedy sketch written by Eric Sykes and performed on the Harry Secombe Show in 1955. Below is a condensed version of the history of the dance, but there is also a more detailed version of this story available.

In November 1955, the Goons (Spike Milligan, Harry Secombe and Peter Sellers) appeared at the Coventry Hippodrome. They did several solo acts, but the one act they did as a trio was "The East Acton Stick Dancers".

Secombe wrote in his biography: “The only time the three of us appeared on stage together was at the Hippodrome in Coventry. It was the policy of the theatre to put on what they called a birthday show in the run-up to Christmas, and we were booked as the headliners.

"I was to do my usual performance – a mixture of gags and straight songs; Spike was at that time still working on his act; and Peter, who was completely without nerves, was experimenting with all kinds of comic ideas because he hated doing the same act night after night. The only piece of material which we did together was a skit on Morris dancers (called the East Acton Stick Dancers) which Eric Sykes had written for one of my television shows. For this we wore farmers' smocks and shapeless hats and had bells round our ankles and waists. For some reason best known to himself, Peter appeared as a hunchback, a la Charles Laughton in the film The Hunchback of Notre Dame. We also carried sticks will bells attached, with which we bashed each other in time to the music of the 'Blue Bell Polka'.”

We don't just know it happened, we even know the costumes and the music! Sit back, look at Andrew Hilditch's cartoon, listen to the Bluebell Polka and use your imagination.

This version of the dance was copied from the dancing of Old Star Morris, with the occasional tweak by Anonymous Morris. 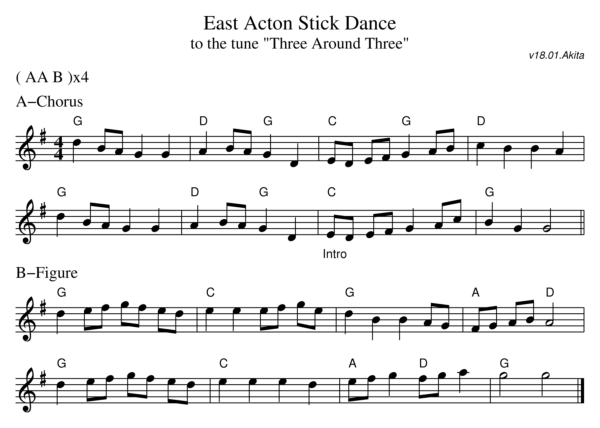 Form a line of three across, facing the band. The dancers are "Right", "Middle" and "Left". This dance looks good with several parallel lines of three.

Sticks should be held in the middle throughout the dance.